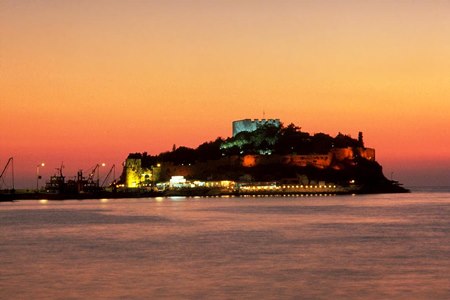 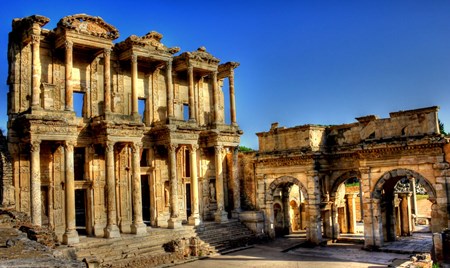 Destination’s: 2 nights in Kusadasi, 1 night in Pamukkale, 4 nights in Izmir

After you arrive to Izmir Airport, our tour guide will transfer you to the hotel. After a quick city tour of Izmir, your free time will start and overnight in hotel.

After breakfast in the hotel, we will go to see Acropolis / Asclepion in Pergamum. Pergamum reveals the history of Bergama in Izmir. It is possible to see that Pergamon Ancient City, the historical and most magnificent settlement of Pergamon, was the capital of the magnificent Kingdom of Pergamon between 281-133 BC for about 150 years. It has preserved its historical reputation in the world and in Turkey with its royal palaces, architecture, streets, social and commercial squares, magnificent library, theater area, waterways and fountains. After exploring the structure of the ancient city, we will visit St.Policarp Church which is one of the most old buildings in Izmir. We will drive to Kusadasi and spend the night there.

After breakfast at the hotel, we will visit the Temple of Artemis which is one of the seven wonders of the world. In this tour, you will see most of the Ephesus Ruins, terrace houses, streets, roads, fountains and more. After having lunch in one of the Turkish restaurants, we will drive to Virgin Mary’s house. It is said that after the death of Jesus, Virgin Mary was placed here by the saint jeans and ended her life here. We will transfer you to your hotel and overnight in Kusadasi.

After breakfast, we will drive to Izmir for 2 hours and see Sardis, Artemis Church, Philadelphia and Leodicea churches. Overnight in Izmir

This your free day which you can do personal spending such as shopping or relaxation in Turkish baths. In the evening, we will go to Pamukkale. Overnight in 5 star hotel in Pamukkale.

After breakfast at the hotel, you can see Hierapolis Ancient City which is known as Holy City because there are so many religious structures and temples. You can swim in the ancient pool and see beautiful white terraces there and take photos. Free day at the afternoon for spa. which you can enjoy termal pools with 35 santigrat degrees. Overnight in Pamukkale.

After the breakfast, we will drive to Kusadasi and spend some time there. Pigeon Island, Different beaches, Bazaar. Overnight in Kusadasi.